Technology ebbs and flows between leading the market and being in-demand. For years we have looked to realize technology’s promise of contextual information. We have looked for ways to answer how technology can align in mobile, social and content. Beacon technology will prove to be an important step in the evolution of a connection between digital and physical space.  We work in the digital space and we work with a lot of cultural and educational institutions such as museums and universities and we look forward to the doors this will open.

The ability to provide a compelling digital experience based on a physical / location interaction, has not been viable until recently. With advances in smart phone and sensor technology we are now able to accomplish this level of interaction and engagement. This was the goal when bv02 partnered with the Canadian Museum of Nature to develop a proof of concept that realized location-based interaction by developing a trial application to interact with Estimote beacons. 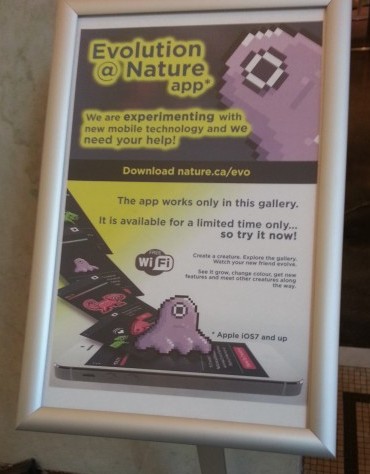 In mid-December 2014, bv02 and the Canadian Museum of Nature launched the pilot project in the Mammal Gallery using five (5) Estimote beacons. As patrons visited the museum, they were prompted to download the app onto their iPhones and interact with a game based on Evolution as they explored the gallery and came into range of a beacon. The pilot enabled us to test the suitability and garner an understanding of beacon technology in a museum environment.

We worked very closely with our good friends at TwelveDot who were an integral part of this project. TwelveDot Inc. is a security consulting practice with over 20 years experience in security engineering, corporate security policies, international standards, network and application vulnerability assessments, and just about everything in between.

We set out to design and build a proof-of-concept that:

Evolution @ Nature is an iOS app that:

And then, at the end of the pilot, we will have:

After a quick physics refresher, we dove right into the market. We obtained a variety of the competing beacon brands and get to play with a number of them. From our point of view, all beacons are essentially the same. The differentiations are: Software SDK and ease of adoption; Price, availability, shipping, etc; Content/context management system; and, API. The underlying technology is all the same, the value add is in the extras. These will be commoditized almost immediately.  We set out to use the Esimtote beacons for this experiment. 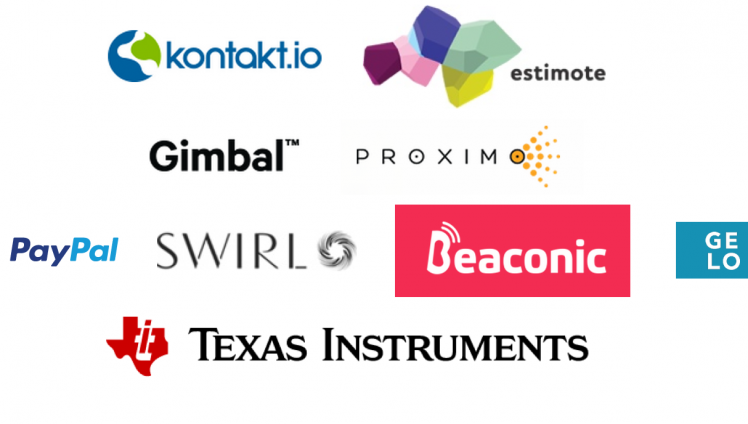 Quick hits about the technology:

The Underlying technology is Bluetooth Low-Energy (BLE), part of Bluetooth 4.0 which was released in 2010. All Bluetooth Devices advertise and connect. The advertising aspect is a one-way communication. There are two key components to Beacon radio signals: interval and power.  The interval is the frequency a device advertises and the power is the strength of the signal – like the volume of a sound. Advertising intervals range from 20ms to 10s intervals. A shorter interval will result in higher accuracy but will mean a shorter battery life. The coverage distance is determined by the signal power and while a high power signal will cover more distance, it will have less distance accuracy – higher power also means less battery life. A lower power signal is better for close-up accuracy which can mean accuracy within 10 inces. The application on the device will then calculate the distance to the beacon by the Relative signal strength (RSSI).

Advertising signal includes a small amount of identifying data. The main piece of information advertised is an ID. More specifically: UUID (same for all beacons for an organization), a major number (floors, wings, rooms), and minor number (individual). The combination of IDs is used to fetch micro-location and context/content. e.g. depending on distance, location & context display information on a user’s phone. Geofencing is achieved by an app subscribed in the OS to constantly listen for a particular identifier even if phone is locked and app not running.

When designing an interactive experience in a public place like a museum, locational context is key. Having Estimotes as low maintenance facilitators of points of interest makes designing with them a dream. We are given carte blanche technology that we can work into any number of design ideas. On the surface, Estimotes can be used simply to trigger location specific information for patrons related to the exhibit they are currently in range of; but the technology allows for so much more.

A game could be designed to show how a disease spreads. Placing one Estimote somewhere in the building, which will “infect” any users within a small range. Infected users can pass on the infection to anyone they get too close too. Additional Estimotes can be placed as surveillance and data can be tracked through the day as to who is infected, where they have been, and how the spread happened. Patrons can watch a real-time spread of the virus with a visualization program. This idea could be made more interesting by introducing viral mutations, vaccines, continued vaccine development (newer mutations won’t respond to vaccines made from older mutations) and viral mutation tracking. Games like this are a great way to engage the public in learning about how certain natural concepts work without subjecting them to long lengthy explanations. To re-appropriate an old writing adage: “Show, don’t tell”

Identifying the goals of the pilot was the first step. The second step was to create a game concept that would be compelling enough to draw in participants and keep them engaged as they naturally moved throughout the gallery and encountered the beacons.

Evolution @ Nature is a game based on the concept of evolution, with a twist. Participants given one of five arbitrary creatures – a fish, reptile, insect, goat or bird. As people came within range of a beacon in the gallery, their creature would “evolve” and develop a number of randomly selected attributes, including colour, diet (herbivore or carnivore), luminescence, blinking eyes, and random sounds. After interactions with all 5 beacons, the output was an odd creature with a combination of unique characteristics, which users were encouraged to share with their friends through Twitter.

The randomness of the game enabled people to have a unique experience and allowed them to compare their results with friends and family who were also playing. Below are sample screens from Evolution @ Nature to illustrate the experience.

Upon downloading the app, users are greeted with a simple menu that also provided a tutorial to familiarize users with the concept. 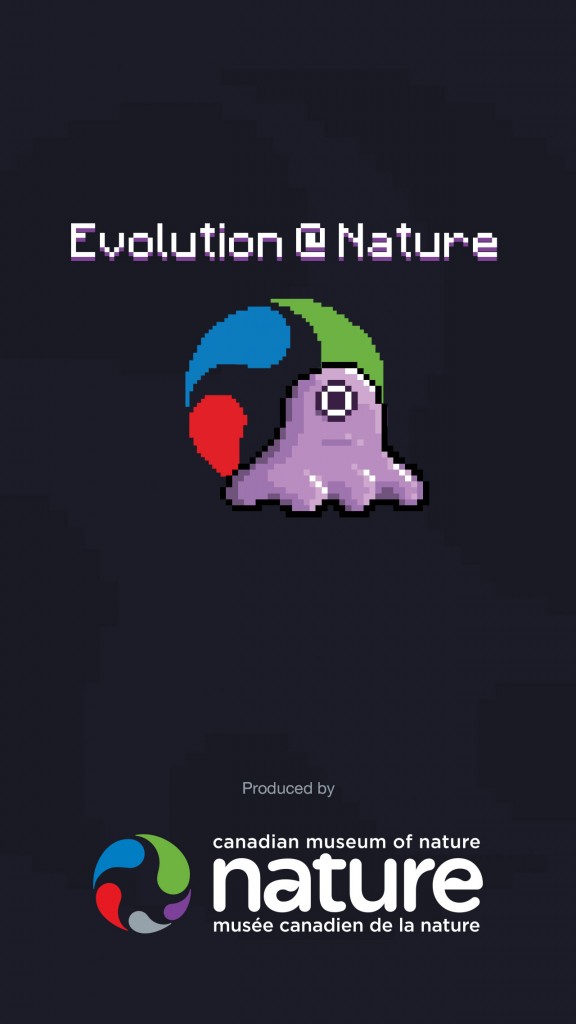 All users start as a amorphous blob representing a carte blanche creature without attributes. Instructions prompt the user to wander around the gallery and add attributes to their creature. The health bar is introduced with a green to red gradient to convey the feeling of safety to danger as it drops. 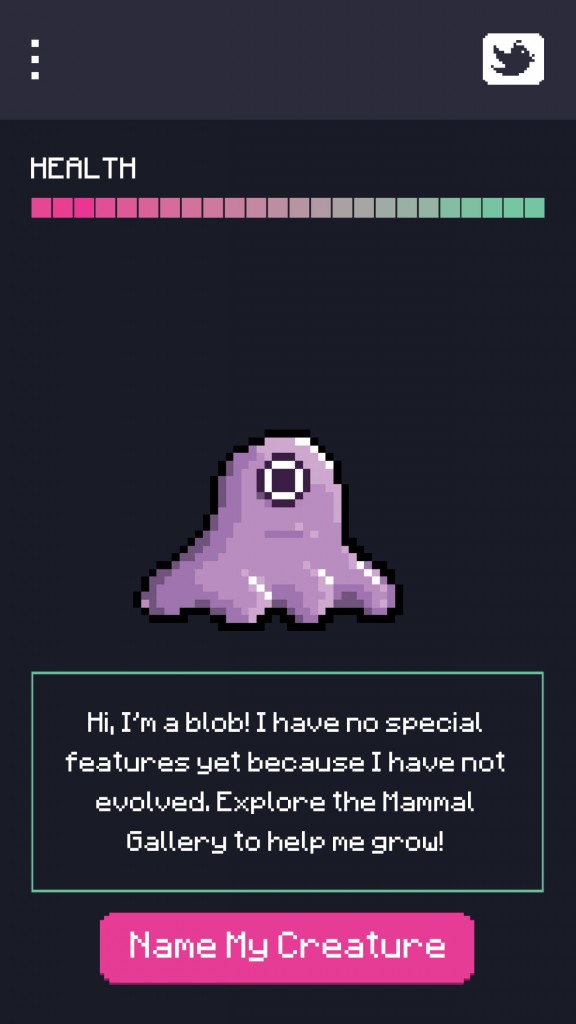 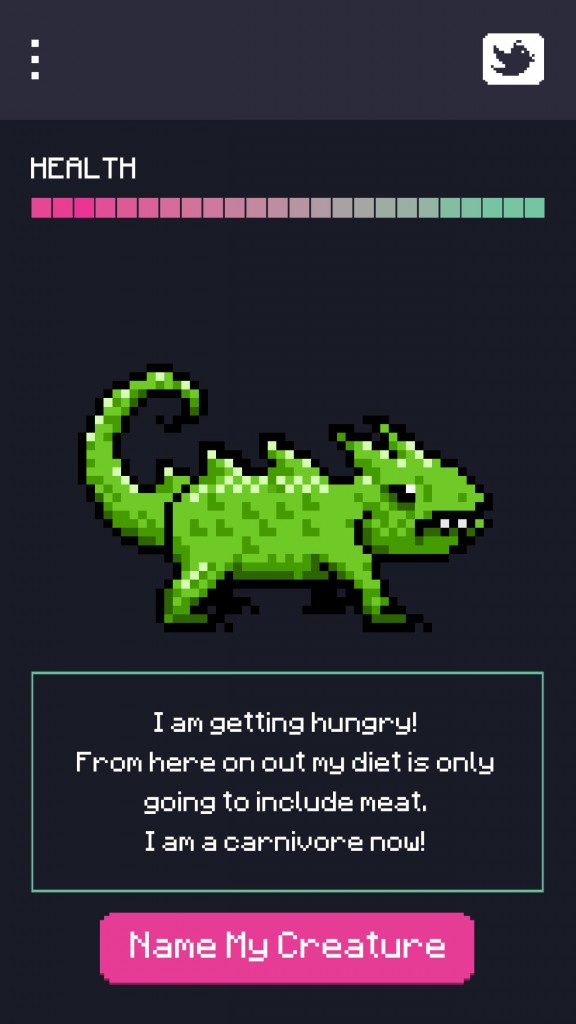 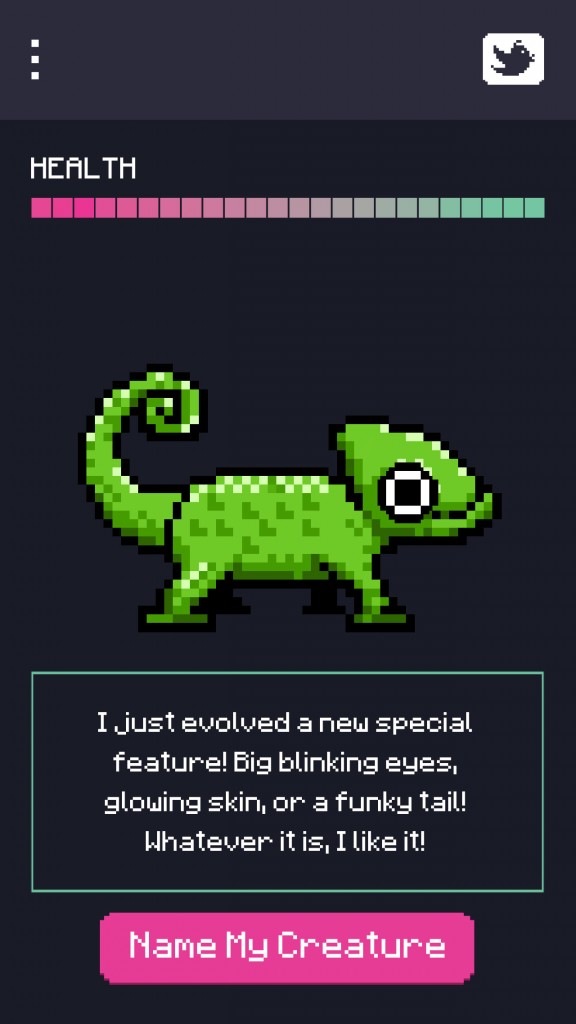 If a user spends too much time out of range of a beacon, the creature will grow hungry and their health will drop and prompt the user to keep moving to come within range of a beacon to increase health and complete the evolution. 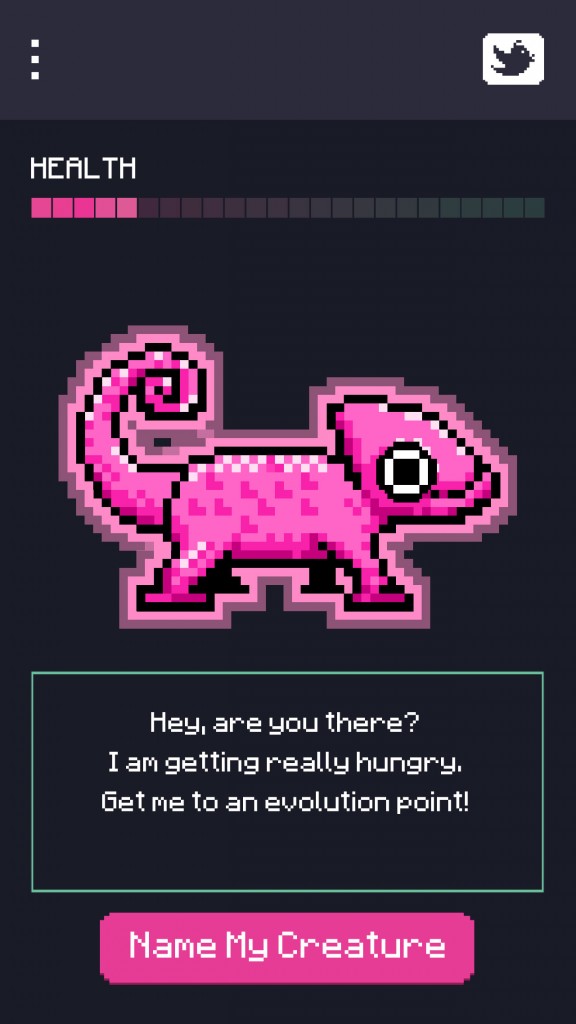 At any time throughout the game, users were able to share their partially or fully evolved creature with their friends on Twitter. Once the fifth and final beacon was signalled, they were given the choice to start again with a new creature or keep playing. 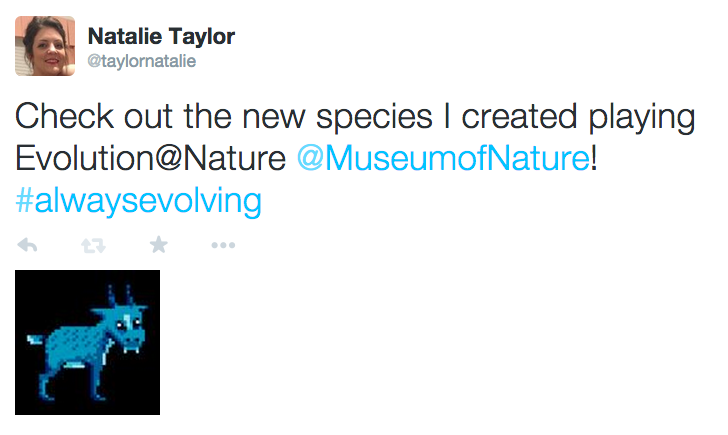 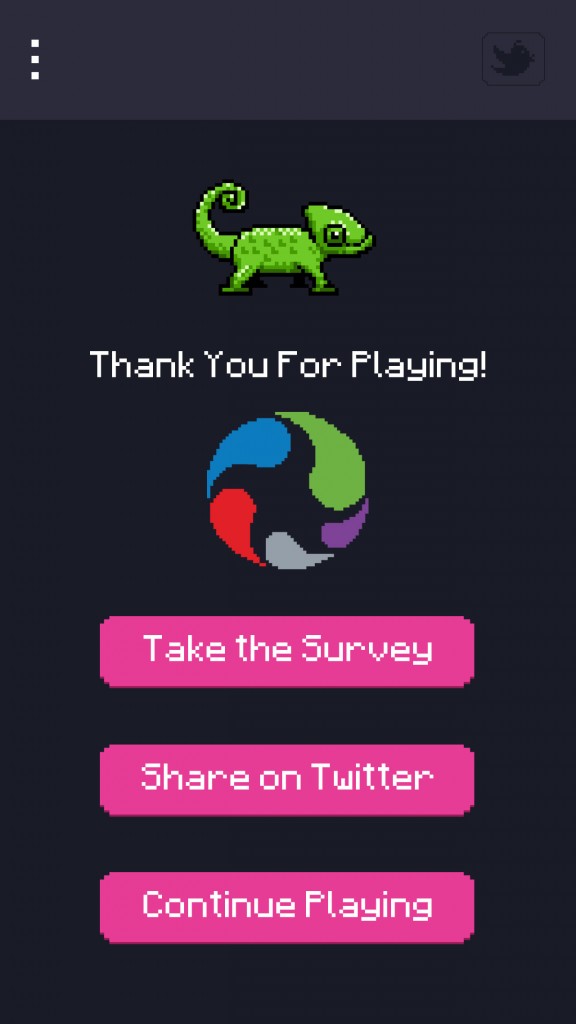 Evolution @ Nature – what we found

Sessions over the course of the experiment

Distribution of amount of time spent in the app

Distribution of number of beacon interactions per session

With over five (5) weeks of data from the pilot, the best way to communicate and highlight all of the relevant information was to bring the experience to life visually. You can see the journey of each active user throughout the Mammal Gallery including points in which they encountered beacons, or evolutions (flashing different colours). Start by selecting a session from the drop down.

Open in a new window.

Besides a poster at the entrance of the gallery that prompted people to participate and download the app, and the ability to share your evolved creature on Twitter at the end of the game, there was no outside-the-museum promotion or advertising pushing trial.

We’ve learned a lot in the process of this experiment, and have been diligent to keep a high-level view of the landscape. Theres lots of opportunity to take a few easy steps into this space. There’s a lot of work and thinking that we’ve done that would transfer to other museums and public institutions. We would love to experiment with you: reach us at letsgetstarted@bv02.com.

One response to “Estimote beacons at the Museum of Nature”