In recent years Sitecore has held its symposium as a biennial event every second year. I’m sure everyone would love to make it an annual event but after attending I could see how much effort was expended in planning the event – A lot! The Sitecore community has continued to grow and it’s just not feasible for Sitecore to hold an event of this scale on a yearly basis. 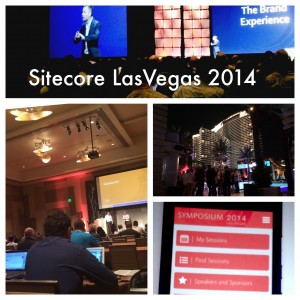 One thing was immediately clear, everyone from Canada seemed to have flown to Las Vegas on Air Canada rouge and they were extremely upset by the quality of the experience. Good to know and glad bv02 flew down on United Airlines! The flight may not have been a good experience for many but Sitecore definitely put on a good show. The entire event was a great atmosphere for meeting people, making connections, and learning about new features in upcoming Sitecore releases (the public got its first look at Sitecore 8!). While some of the features introduced, like machine learning, may be too advanced for the average Sitecore customer to take advantage of, Sitecore was heavily focussed on the new Experience Database (xDB) and what that will bring to the table for Sitecore 7.5 and above.

As a developer who came to the symposium seeking some hard core technical info, I did leave a bit disappointed but there was a lot to be gained from the experience. It’s hard not to soak in a lot of information when surrounded by so many great Sitecore minds. With Sitecore releasing so many new products and renaming existing products, it was very helpful to hear everything first hand instead of attempting to piece it all together. You may have noticed that every public-facing Sitecore product now has the term “Experience” in its name. Experience the experience that is the Sitecore Experience Platform!

Over the past couple years I have felt that Sitecore has treated ecommerce like a second class citizen so it was awesome to see a lot of buzz around ecommerce from Sitecore as well as other organizations. The lack of a good, built in ecommerce solution over the past years has prompted a lot of development in that space by 3rd party companies who had their products on display. Along with that, Sitecore was showing off Sitecore Commerce Connect which will act as a solid platform that can be extended upon by all 3rd party ecommerce integrations. Sitecore also spent a good deal of time discussing Sitecore Commerce, powered by Commerce Server, which is built on top of Sitecore’s recent acquisition of Commerce Server. I was able to meet a lot of people at the conference who were there solely for Commerce Server and were interested to know more about Sitecore who purchased the ecommerce product at the end of 2013.

The Sitecore community will continue to ring with excitement of Sitecore 8 until we get our hands on it later this year. I look forward to the chance to learn and build upon the new platform and have been overly reassured that it has been built by a company that cares about its product, its partners, and its customers.